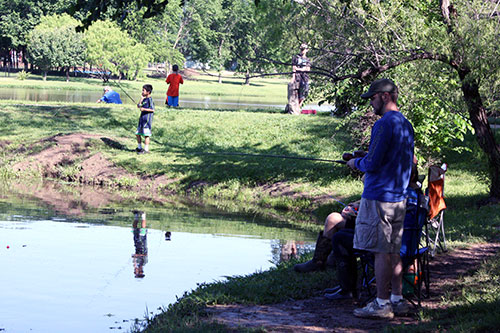 Whether you are into sports, nature, or just want to take your kids to a playground, Colleyville has a park for you. Come out and enjoy your beautiful parks!

Click here for a map view of the parks and facilities.

The historic Webb House, built circa 1914, is one of Colleyville's most historic sites. For rental information, contact the Parks and Recreation Department at 817.503.1180

The Webb House was built in 1914 by John Rueben Webb to replace his family home, which had burned. The house stands in what was once the settlement of Bransford, one of the early communities that would later become known as Colleyville. An example of a regional housing design prominent in the early 20th century, the Webb House features a one-and-one-half story, gabled-roof, T-plan design, with a full-hipped roof porch on columns. The pair of central doors, flanked by double-hung windows with small space windows under the eaves, was typical of its era.

Mr. Webb, a Tennessee native, came to Bransford in 1897. He served as a section laborer and section foreman with the Cotton Belt Railroad for 44 years, retiring in 1941. The owner of Bransford’s last general store, Mr. Webb also was a trustee of the local Woodmen of the World, commander of the Maccabee Lodge, trustee of the Pleasant Run School, and the unofficial “mayor” of Bransford. He also managed the Grapevine Rabbit Twisters, a well-known local fiddle band popular at the time.

The Webb House was restored through a community effort to preserve the home as an example of the regional architecture of the early 1900s, and for its historic association with Bransford and the Cotton Belt Railroad. The restored house was dedicated on December 21, 2002.

Reservations can be paid with cash or check in person at the Parks and Recreation office, 2512 Glade Rd., during normal business hours.

The city has six lighted tennis courts at City Park, 5202 Bransford Road. City Park Tennis Courts are open for play daily from 6:00 a.m. to 10:00 p.m. Tennis court reservations can be made for $3 per player for 1.5 hours of play. Reservation Form

Reservations can be paid with credit card by emailing or faxing in the appropriate form(s) listed below.

Help Us Maintain Your Parks

Although crews inspect park sites on a regular basis, litter or vandalism may occur, or additional maintenance may be necessary between visits. The next time you visit one of the parks and notice anything that needs attention, please report it to the Parks and Recreation office at 817.503.1180.

By donating a tree to the Living Tree Donation Program, you can help your city parks while at the same time celebrating life by planting a tree! You can plant a tree in tribute of a wedding, birth of a child, anniversary, or to honor the memory of a loved one. View details here or call 817.503.1180.

Free viewers are required for some of the attached documents.
They can be downloaded by clicking on the icons below.